The difference between 2D and 3D animation

I’ll explain the core differences between the process of 3D and 2D animation. I’ll cover issues like frame rates, moving holds, working on a 3D software and more.

What does it mean to make a 2D animation as opposed to making a 3D one? well, actually the making process is very different.

For starters, to animate in 2D you need to be able to draw. everything you see in traditional 2D animation had to be drawn. Usually frame by frame.

for a 3D animator, while being able to draw well is defiantly an advantage, it is not mandatory. When you’re animating in a 3D environment you move the character, kinda like a puppet, right there on the computer.

In 2D animation, you draw the first key pose, and then the rest of the key poses. You then draw all the frames in between them. But when we draw the character, we only draw what is seen in the shot. When a character’s arm is behind their back, we don’t draw that arm. If something is not shown, I don’t have to draw it. If a character closes their eyes, the eyeball does not exist anymore until I draw it again.

This concept is one of the first big differences between the two types of animation. That’s because when you’re working in a 3D environment, all the parts of the character are always there. and you have to be aware of them, while in 2D you just draw whatever is seen and the rest does not exist.

This concept gives a small advantage to 3D animation, because since the character is in a 3D space, you can change the camera after you animated the scene. In 2D, if you change the shot angle you will have to redraw the whole sequence, because you drew the character from a certain angle. When you animated in 3D you’re still considering the camera angle at all times, but its much easier to later change it if you need to. 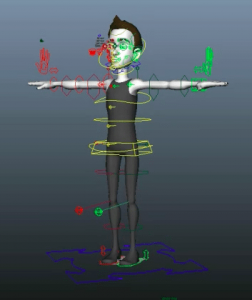 Ok, so we all know that animating in 2D means drawing a lot. But what does it mean to animate in 3D? how does it look like? well, lets see.

In our scene, we will have a 3D model. That model is rigged, which means it is programed with all the right virtual bones and controls to make it as easy for animators as possible to animate.

As you can see, this model has controls in every key position in its body. I can grab one of the controls and move it around. But that only explain how we can move the model, not actually animate.

There it gets a bit more complex. Look at this window. This is called a graph editor.

3D animation is all about graphs and curves. Yeah, I know math and formulas don’t belong in an artistic thing like animation, but there it is. Now, you might be a bit overwhelm when I show you this, but these curves correlate to each controller. There’re actually multiple curves that correlate with each one controller, since we’re moving in a 3 axis system. So yeah, an animator spends a lot of time looking at graphs and curves.

It’s actually a lot simpler than it reads here, once you start playing with it. We also have an entire course called Maya Animation which teaches you everything you need to know to be able to animate in 3D like a pro.

Now we know about curves, but we still didn’t cover the animation process.

Lets say we want this character to raise their hand. We’ll go to the first frame in the timeline and create a keyframe. A key frame is you telling the program you want the hand to be in a certain position at a certain time. Then we’ll go 10 frames forward in the time line and move the hand up. The computer then interpolates the difference between the first and second keyframes we made and generates the movement.

An animator will repeat this process for almost all body parts for every keyframe, and tweak them for hours and hours. After a lot of animating, the graph editor would look like in the picture above. This editor is what animators look at most of the time, just like 2D animators look at their drawings.

Another difference between 2D and 3D animation is the frame rate, and what happens on moving holds. What do I mean by that? Well, in film we usually work with 24 frames per second. in 2D animation That means that there is a drawing every frame, 24 times a second. That’s a lot, but when there’s no big fast movement we can often settle for 1 drawing lasting for 2 frames. So there’re actually 12 drawings per second. This is called “working on 2’s”, because you’re making a change, or a new drawing, every two frames.

When the movement is very still, we might even work on 3’s and 4’s. You see that a lot in Japanese animation and stop motion. Sometime they would hold the same drawings for many frames.

In 3D though, it doesn’t really work like that. When a 3D character doesn’t move at all, even for 1 frame, it seams wrong. It seems dead. This makes it challenging to do a “moving hold” in 3D animation. A moving hold is used whenever you need a character to do nothing, but still feel like their alive.

While in 2D and stop motion you can settle for a drawing every 3-5 frames, or even not have it move at all for a few seconds, in 3D we always have to keep the character moving.

I hope this short overview gave you a basic understanding of what it means to animate in 3D as opposed to animating in 2D.