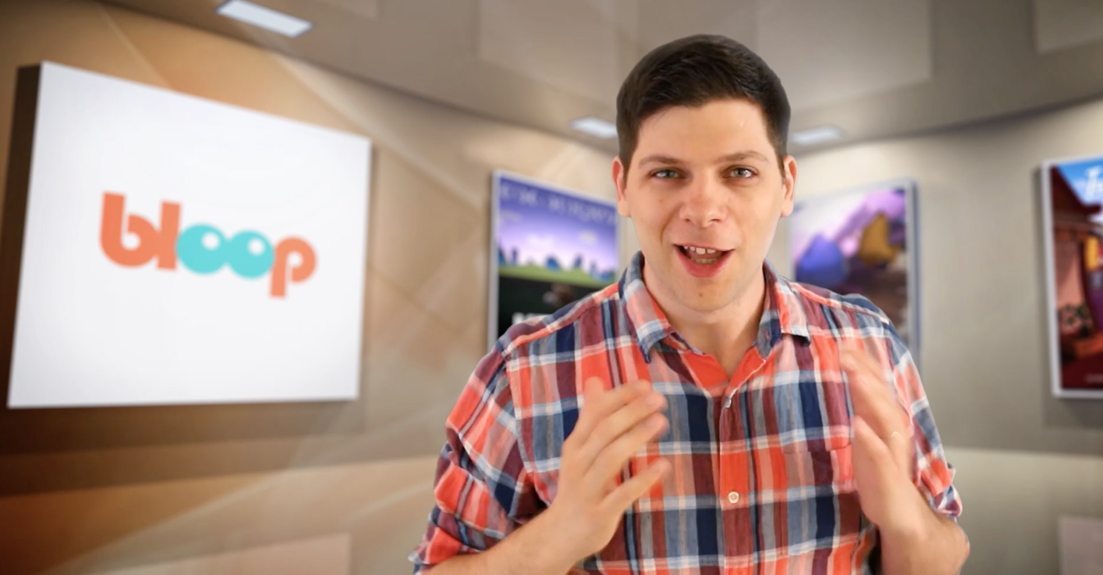 As many of you who follow us on YouTube saw, this week we introduced our new video schedule, including 3 new weekly shows, as well as a visual makeover. Here’s a little about what went behind this new video initiative.

A visual step up

Making video tutorials was something I’ve always done on the channel, that’s how I started out, but it seems like over the 3 years Bloop has been around it has grown to more than just tutorials about animation, and I felt it needed to adjust. You’ve already seen some of those adjustments with shows like The Key Frame or AskBloop, but I felt these could be pushed a bit further in terms of production. So we got some fancy new video equipment and got to work.

With this new direction, all shows will be recorded with an actual person (me) in front of the camera, with higher production value.

Before I get into the content of the 3 new shows, one big change that they all have in common is that they will all feature me in front of a camera. That’s the first time I’m tackling this type of video production, as well as showing myself that much.

I’ve had some videos with me in them in the channel before, but the vast majority of the videos were video edits or screen captures. Even our news show didn’t show me, but rather shots of whatever item I was talking about.

The decision behind brining myself more to the online spotlight within the Bloop brand is to improve the connection between the person behind the company and the audience. The stronger the connection gets, the more people feel invested. I want you guys to be invested with us, and having a face usually helps.

The Key Frame (our news show) discusses recent event from the animation and visual effects industry. The reason we cancelled the show was because it was getting into a lot of copyrights issues.

Showing even a few seconds of a trailer or footage from a movie can cause copyright issues, and even a strike against your channel. At some point in the show I switched to only showing images of whatever I was talking about, which made for a rather dull video. So I cancelled the show.

When I made the decision to tackle YouTube with the new video production initiative, I thought that bringing The Key Frame back should be the first thing we do. People were quite sad when it went away, some saying that was how they stayed updated on animation news, some sending me personal emails about the cancelation. I honestly didn’t know it had this loyal following, and I’m happy to bring it back.

Now that I’m able to use myself in the videos, it’ll be much easier to make an entertaining show, even with showing just still frames of what I talk about, because these frames won’t take up the whole show. I’m also changing the format a bit to include more items per episode, as well as updates and news abut Bloop.

The AskBloop Q&A show will respond to questions from viewers. This is another revival of a show we used to have. It’s another great connection-building show, and I’m getting so many questions on a daily basis that I think it’ll be a great way to both satisfy some common audience questions as well as talk about things I don’t get to on the channel (like the business-side of things, or personal opinions).

Short of the Week

In this show I give a quick recap of an animated short I particularly liked, and talk about why I think it’s good. The trick with this show (and that’s something that took some thinking to decide) is to NOT make it a review show. I’m not taking shorts and reviewing them, but only talking about ones I already love, and explain why I think they’re good. I want to come from a place of trying to help those indie-shorts get exposure, not rip apart the ones I think are bad.

Bloop has always been about animated shorts, and I think dedicating a show to feature some of the more successful ones (that you might have missed) will be great for both the audience and the creators.

So what do you think about the new video direction? I don’t ask for opinions often, but I’d like to hear your thoughts about this. You can watch the first episodes of each of the 3 new shows on our channel and let me know what you think over email ([email protected]).