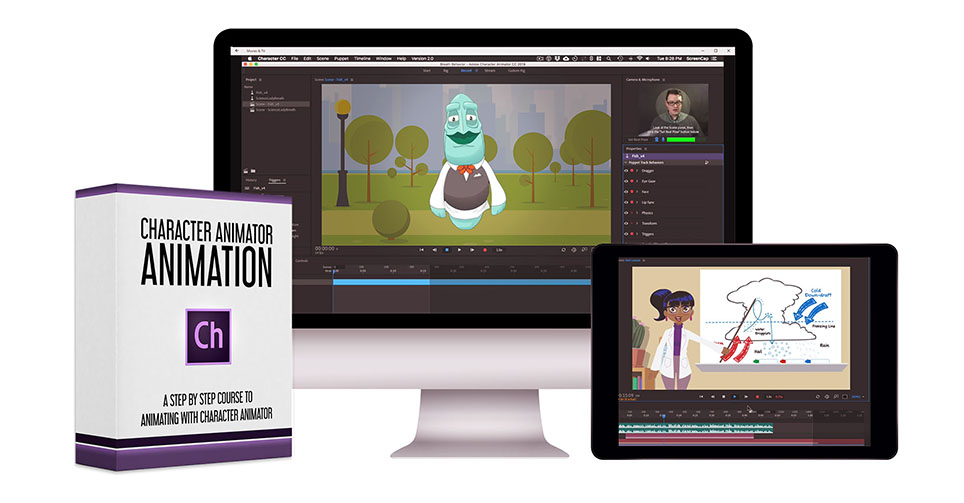 Adobe’s Character Animator is a new player in the animation game, but it’s already made waves in the industry.

It lets you record yourself in real time and use your face animate a pre-made rig, lip-sync and all.

It’s pretty magical. And easier to use than you might think.

As soon as I saw what this program can do I knew we’d have to make a course about it, knowing it’s going to explode (Showtime even produced an animated show with Stephan Colbert using this program).

An amazing choice for total beginners

Adobe Character Animator levels the playing field by letting you use your webcam and microphone to drive the character performance.

What’s in the course?

What will you learn?

We’ll start by understanding how Adobe Character Animator works. We’ll go over the interface, and learn how layer names and tags work, as well as the triggers, physics and custom behaviors.

We’ll learn the process of rigging the character’s face, including advanced eye techniques, mouth and lip-sync, jaw animation, head turns, and even create custom art styles for use with the Characterizer feature.

After finishing the facial rig, we’ll cover the body mechanics. We’ll learn how to create animation triggers for body actions, add a breathing behavior, setup a walk cycle, and use magnets for interacting with objects.

We’ll cover the entire process of creating a fully animated shot, through working in passes to record and adjust lip-sync, animate different parts of the body separately, changing backgrounds, adding particles and exporting a finished scene.

We dedicated an entire section of the course to go over some advanced techniques such as using a fader, rigging a 3D model, animating particles, adding an auto blink, adding a wiggler effects and creating parallax for the background.

As always, once the price goes up after the launch period is over, it will never drop again.

Learn more about the course