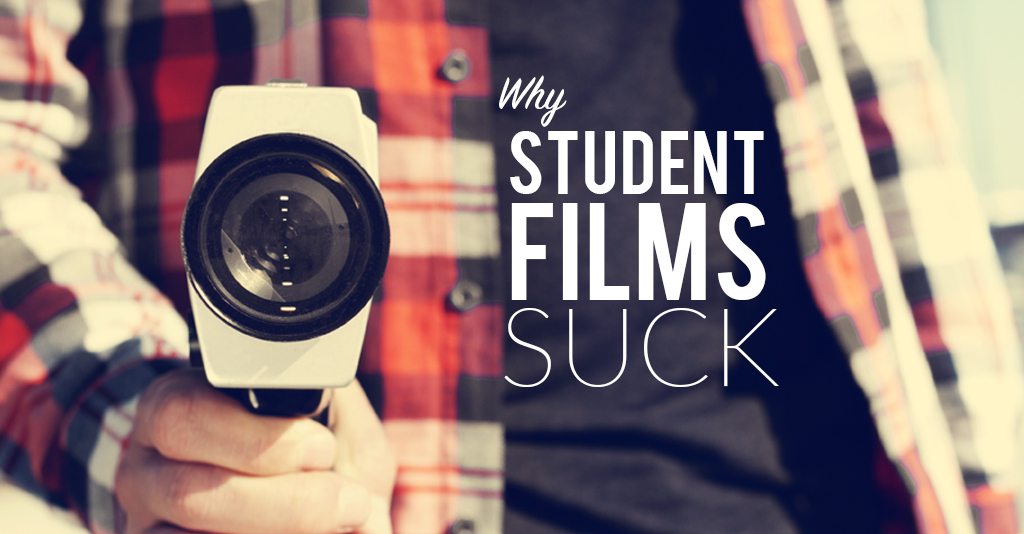 We’ve all been to student films screenings, let’s face it – most of them suck.

That’s not exclusive to animation student films, the same goes for classic film students as well. A majority of them aren’t good. You can say that it’s because they are inexperienced filmmakers, or maybe they didn’t put as much effort as they should have.

That might be true for some, but I think I have an idea for the reason why many of them suck. Read this and it might save your student film from sucking too.

While some schools train directors, many 3D animation programs train 3D artists. They teach them modeling, rigging, texturing, compositing, lighting, rendering and animation. All very different skills, and none required to make a good director.

YET schools often ask them to direct a film as their final project at school. Either doing the whole film themselves, or work in small groups.

That’s where the problem lies. Asking an aspiring modeler to make an animated short film is insanity. It has nothing to do with his skills and will not help his future career.

I’ll use my story as an example.

I knew I wanted to be an animator. I knew that whatever I produced at school should be used for getting me hired as an animator after graduation.

Now, I couldn’t model, barely knew how to rig and had no experience with lighting and rendering. So what did I do for my film? I went for the bare minimum of what I needed to have a film, heavily focusing on my strength – animation, while downplaying all of my weaknesses.

I stuck to only 2 characters (the minimum for a basic short film).

I picked fish, which has no legs or fingers, and mostly floats (which made the animation process easier).

I designed them to have huge heads so I could focus on expressions and emotions.

I intentionally had only one location (an aquarium tank) which I never put into focus.

There were barely any textures. One fish was yellow, the other was blue.

This way I made sure nothing that isn’t essential takes time away from my animation, and I made my animation subjects as simple as I could.

This isn’t laziness. I can’t stress that enough. There’s nothing lazy about not wanting to waste your time working on skills you’ll never use again. I knew I wouldn’t not be a modeler – so why waste ANY time modeling more than I had to? Same goes for rigging and rendering.

Making your first film as a student is hard enough, so why make it harder?

How can you use it for your film

So what’s my advice for you? Animation students working on their films? Focus on your strengths. Focus on the skill that will get you hired, and downplay the rest.

If you’re a modeler – forget about animation. You probably hate animating anyway. You might be able to get someone to animate for you, but honestly, it’s hard enough to animate for your own film, you won’t get amazing animation from a friend who’s just trying to finish his film on time.

Instead – what about a modeling short film? Think of a creative way to show your amazing modeling skills without wasting time on anything else. I had a friend in school who had a frozen moment in time as his film, with only a slow camera movement going between all the characters. Really interesting – and focuses on his strengths.

If you’re a rigger – create some complex insane machine that does a bunch of stuff, and show it. Forget about story, nobody cares if your story doens’t make any sense. That way you get to show off your skills.

If you’re into lighting/rendering/compositing – Create some incredible environments (maybe super realistic or very abstract and creative) and take us on a journey in that environment. You’ll have so much more time to focus on the things you love doing and you will get hired.

If you’re an animator – do what I do, Pick the simplest environment and focus on the CHARACTERS! Use a white background as far as I’m concerned. Nobody would blame you for not having great matte paintings when they consider you for an animation position.

So why do these films suck?

They suck because students don’t approach making their films this way (yet) and they try to do what they think is expected of a student film.

So the talented modeler sits down and begrudgingly animates her whole film till she cries herself to sleep. So much time wasted on that, that her models are not as good as they could have been – and they also move funny.

People won’t take your models seriously when they move freakishly weird. You are really better off with no animation.

When we watch a film, we are immediately drawn to the mistakes. The faults. The distracting rendering style, the clumsy animation, or the weird models. So why not simply eliminate the weaknesses and double up on the strengths? I think I’ve made my point.

If you’re currently working on your student film, ask yourself this: Is what I’m focusing on now really important to me as an artist? Am I developing a skill I would like to have in the future, or am I just doing it because I think I have to? If that’s the case, try to find every way to get rid of those tasks and simplify your project. You will absolutely benefit from it.